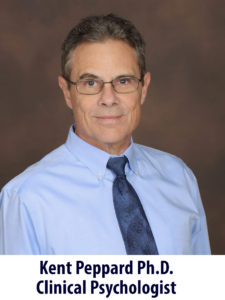 Kent Peppard, Ph.D. is a licensed clinical psychologist who specializes in the assessment of memory and neurocognitive disorders such as Mild Cognitive Impairment (MCI) and various types and causes of dementia. Over the past 25 years he has conducted over 4000 neurocognitive evaluations of individuals showing signs of cognitive changes, decline, and impairment frequently associated with a progressive underlying disease process such as Alzheimer’s disease. In addition to assisting with the diagnosis, Dr. Peppard educates family members as to the nature and implications of the loved one’s illness and also refers them to appropriate community resources when necessary such as the Alzheimer’s Association (Orange County Chapter), and Alzheimer’s Orange County. He also works closely with Geriatric Care Managers.

Dr. Peppard received a B.A. in Sociology/Psychology from the University of New Orleans, an M.S.W. from Tulane University, and a Master’s and Ph.D. degree in clinical psychology from the California Graduate Institute in Westwood, CA, which later merged with the Chicago School of Professional Psychology. He is an Associate Member of the National Academy of Neuropsychology.

For 14 years, Dr. Peppard was involved in clinical trials, working with Senior Clinical Trials, Inc. in Laguna Hills, CA, testing new drugs developed to better treat and hopefully cure Alzheimer’s disease and MCI. In addition, he has regularly provided educational lectures to the general public and to fellow healthcare professionals on subjects relating to the diagnosis and clinical features of the neurocognitive disorders.

From 2008 to 2012 Dr. Peppard worked with CME Consultants, a company that provides Continuing Medical Education credits to physicians. He has given presentations on a range of neurocognitive issues to physicians and other medical staff at numerous hospitals throughout Southern California.  Topics covered in these presentations have included: